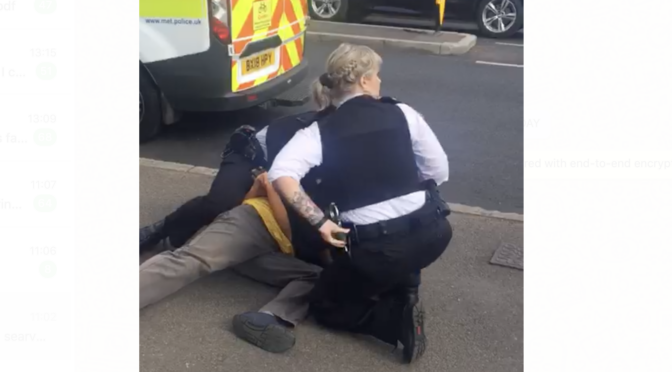 Michael Wilson was walking home from work in Mitcham yesterday (Wednesday 22 July) when he and a colleague, Lloyd, were stopped by police.

An altercation ensued when they tried to handcuff Michael, who was then forced to the ground by police officers and his head repeatedly forced into the ground.

Michael was splitting blood from the injuries caused by the police. At one stage eight officers were involved in the incident.

The pair had been clearing a garden and were on their home. Michael had a bag with his tools in with may have been why the police picked on him.

A witness to the police assualt send this video to BLMM.

Thanks to onlooker Janet Oliver for arranging for this video to be sent to BLMM and for her action in witnessing and holding to account the officers involved.

The officer at the centre of the violent arrest claims that Michael bit him, which the man denies.

Witnesses to the incident say that there was no sign of Michael biting and that he had no time to do so, between the initial conversation with the officer and being taken to the ground.

Lloyd concurs. “I didn’t see no biting,” he insists. “I told him not to resist and to give his name but the police just jumped on him and tried to handcuff him.”

This latest incident of police brutality follows the emergence of a video a few days ago of a teenager in Hertfordshire being stopped and assaulted by police.

One thought on “Video exclusive: violent stop and search arrest of Michael Wilson, 64, in Mitcham on 22 July”