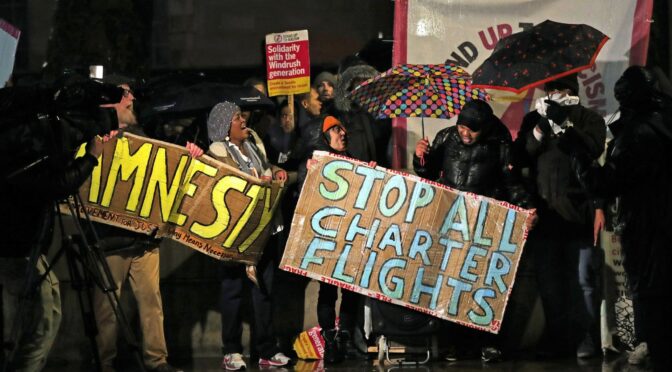 A deportation flight on Wednesday has led to seven people who have been in the UK since they were children being removed to Jamaica on a chartered flight at the cost of £43,000 per individual.

That’s a price well worth paying as the government sees it for generating racist headlines from the Daily hate Mail about deporting “violent Jamaican criminals” and the useful part that plays for the government in whipping up racism so that (some) people don’t see who their real enemy is.

This is the second deportation flight to Jamaica this year despite the Home Office being told that the persons being deported have the right to stay in the country according to the government department’s own harsh rules.

Last year the government reached an agreement with Jamaica that no one who come to Britain aged under 12 would be deported but they have since reneged on that deal.

One person who was scheduled to be deported has been in the UK since he was two years old and at age 23 has just finished serving a two-year prison sentence for a drugs offence. He is being held at the notorious Colnbrook immigration removal centre. His case is not untypical.

These high profile deportation flights are all part and parcel of the ramping up of their racist offensive despite the debacle over attempts to foment racist animosity towards England football players.

Contrary to the Home Office’s own rules, it is deporting people who came to the UK as minors. Not that it should determined who is deported and who isn’t, but it is also the case that none of those deported were found guilty of serious violent offences, with most serving time in prison for drug offences.

Two of the individuals who have been deported also have Covid, but the Tories still deported, despite pleas from the Jamaica High Commissioner.

The original flight was to have included 34 deportees but campaigners and lawyers were able to reduce that number to seven.

Three of the seven people deported were taken straight from prison to the flight while the other four were transferred from immigration detention centres. Of those, two were aged 64 and 66, one of whom has mental health issues and another person was so frail that they had to be carried to the aircraft. Another individual lost a child due to medical negligence and leaves behind a grieving partner.

Also, according to campaigners, five on the flight were the victims of county lines grooming.