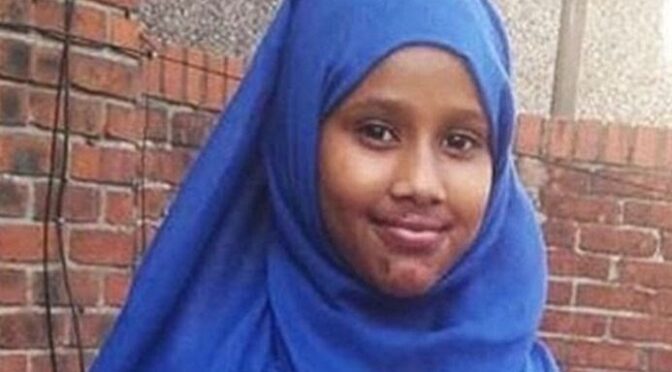 Shukri Abdi died on 27 June last year after drowning in a river in the northern town of Bury. Now one of the children with her at the time of death has admitted pushing her into the “deep end”.

Since the 12-year-old’s suspicious death, her family and supporters have been fighting for justice. She was the subject of one of the large BLM protests in central London.

Currently, the inquest into her death is taking place and already there has been a startling and disturbing revelation, confirming the family’s worst fears – that Sukhri didn’t just wonder into a river all by herself and mysteriously drown.

The inquest, which actually began earlier in the year but was adjourned, restarted at the end of November.

One of the children who was with Shukri has told the inquest that she pushed her into deeper water in the River Irwell.

The identities of the children giving evidence at the inquest can not be revealed and instead can only be referred to as Child One, Child Two, Child Three and Child Four.

Child One spoke via video link about the incident involving Shukri: “She was holding my legs at the back. I pushed her, I accidentally pushed her to the deep end. I couldn’t swim like that, I pushed her.

“She thought she could swim but didn’t know how to swim. She got into the water next to me. She was grabbing my hand. Something happened, she went down in the water to get back up, she didn’t make it. We were calling to Shukri to get up. She didn’t get up. We were all crying and shouting. She’s like really small. We were panicking. We were like: no, this cannot happen.”

A paramedic named Gillian Fenton who attended the scene said no one appeared to be distressed among the four children standing at th bank of the river, and none were wet – suggesting their had been no attempt to rescue Shukri.

“No one appeared to be crying or in any state of distress,” said Fenton.

The family accuses the authorities of institutional racism and the school she attended of failing to stop her being relentlessly bullied.

Anti-racism activist Maz Saleem, who has been helping the Justice 4 Shukri campaign, told Al Jazeera: “Shukri’s mum has clearly told us she wants justice for Shukri. She came here so her children could be protected. They fled from a war-torn country.

“This is why we decided to get the campaign together, to hold those very institutions to account that should have protected her.”

Shukri was a child refugee from Somalia.

Below is the text from the petition started nearly a year ago demanding a full investigation into the drowning of Shurki, which many suspect was in fact an act or murder. The campaign is supported by John Boyega and the daughter of Malcolm X, Ilyasah Shabazz, and US rapper Ice Cube.

We want to see Real Justice – based upon a proper and full criminal investigation which should be opened ASAP – and not brushed away like it was 11 months ago.

12-year-old Shurki drowned in the River Irwell in Greater Manchester.

Greater Manchester Police said it was treating what happened as a “tragic incident” and did not believe there were any suspicious circumstances.

Shukri’s family, who live in Bury, said she could not swim and playing by the river was “out of character”.

Her uncle, Mustaf Omar, said: “She was a sweet, innocent child. Her mum is absolutely destroyed.”

“Everything about it is out of character for her.

“She couldn’t swim so she wouldn’t even go near the edge.”

Shukri, from Somalia, was the eldest of five children and was new to the country, Mr Omar said.