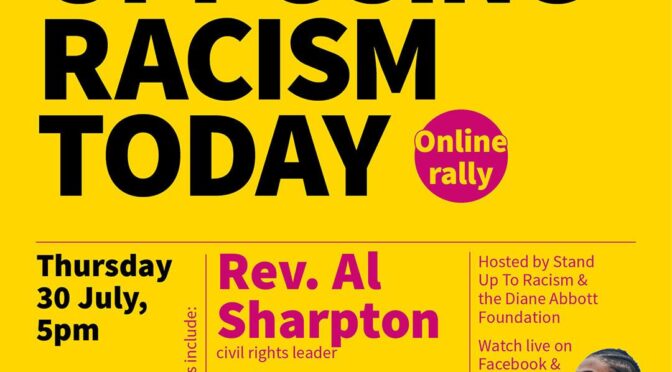 The brutal murder of George Floyd by US police has sparked a global wave of demonstrations calling for justice both for George Floyd and the millions affected by racism.

This online meeting will hear from anti-racist and civil rights figures from both sides of the Atlantic, including Rev Al Sharpton, who has played a leading role in the Floyd family’s fight for justice, on what we can do to build pressure.

As well as challenging racist policing, the meeting will also discuss how this movement can win gains on institutional racism in work, housing, education, and the massively disproportionate affect COVID-19 is having on Black communities.

Organised by Stand Up To Racism. Supported by BLMM 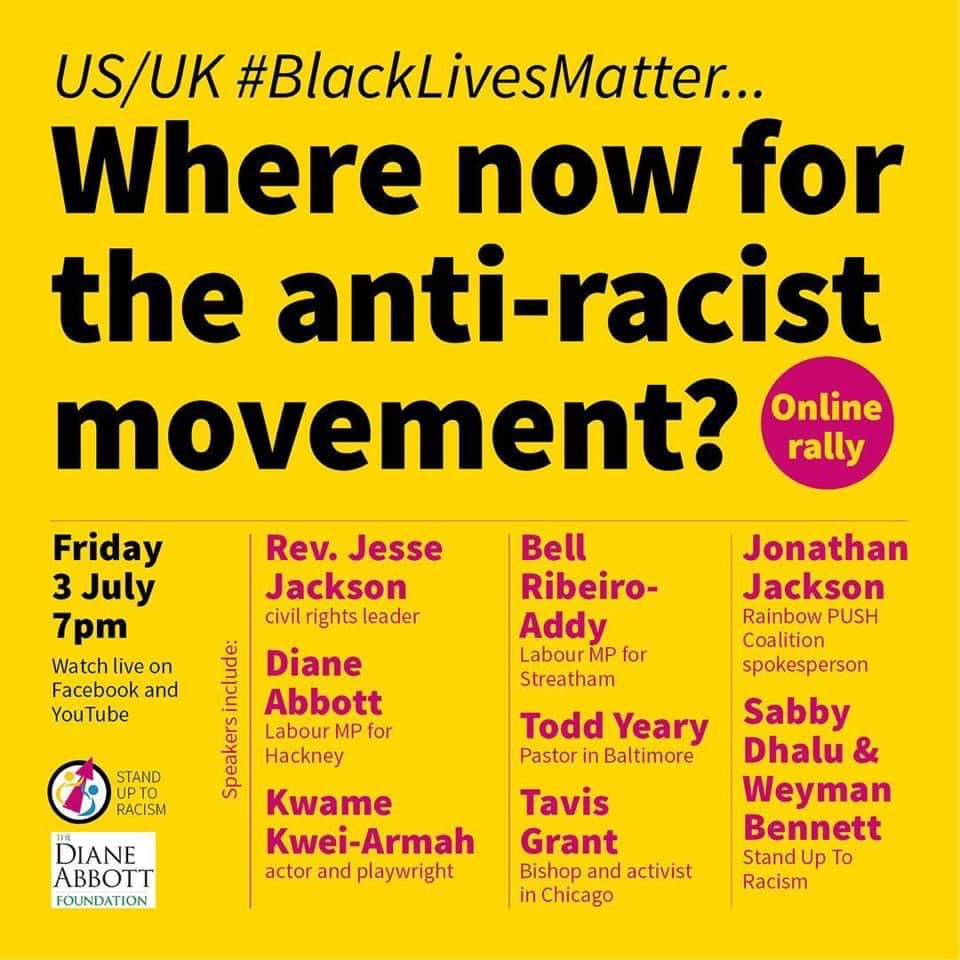 What Next for the Anti-Racist Movement?

It has become impossible to ignore the disproportionate effect of state violence on Black communities worldwide but especially in the United States and the UK.

The sheer scale of the recent global protests is reflective of the fact that the murder of George Floyd is not an isolated incident. The protests also come at a time when Black communities in the US and the UK feel that they have been deliberately endangered in the response to Covid-19 and deprioritised in general.

Diane Abbott MP and Rev. Jesse Jackson will be joined on Friday by notable members of the civil rights movement and anti-racist campaigners for a special discussion exploring ‘What Next for the Anti-Racist Movement in the UK and the US?’

Jesse Louis Jackson Sr
American civil rights activist, Baptist minister, and politician.
As early as 1971, Ebony Magazine named Jackson to its “100 most influential black Americans list.” During the 1980s Jackson achieved wide acclaim as a politician and a spokesman for civil rights issues.

Dr. Sheridan Todd Yeary
Senior Pastor of the Douglas Memorial Community Church in Baltimore, Maryland. A third-generation preacher/pastor, Dr. Yeary serves the faith community of Douglas Memorial as the fifth pastor in its 90-year history. Dr. Yeary is often sought after to offer commentary, public testimony, and insight on a variety of public policy and leadership concerns, and has presented in a variety of forums.

Jonathan Luther Jackson
American business professor, entrepreneur and social justice advocate. He is the national spokesman for the Rainbow/PUSH Coalition and a partner in a Chicago-based beverage distributorship

Kwame Kwei-Armah OBE
British actor, playwright, director and broadcaster. In 2018 he was made Artistic Director of the Young Vic, where he has directed Twelfth Night and Tree. From 2011 to 2018 he was previously the Artistic Director of Baltimore Center Stage where he directed: Jazz, Marley, One Night in Miami, Amadeus, Dance of the Holy Ghosts, The Mountaintop; An Enemy of the People, The Whipping Man and Things of Dry Hours