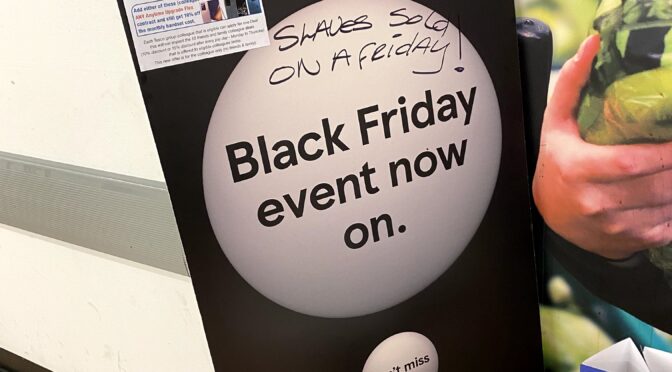 Slaves sold on a Friday – that was the shocking racist graffiti that appeared in a Tesco store in Tottenham on 8 November.

BLMM can reveal it follows a complaint made two months ago to top management of the UK’s largest supermarket in response to alleged routine racist abuse of workers at its South Tottenham store by the white manager.

That is the claim of a worker at the store, a copy of whose statement to Tesco bosses is in the hands of Black Lives Matter Movement.

BLMM has reached out to Tesco for a response, but as yet have not heard back.

One of the store managers (there are several store managers at large Tesco outlets) stands accused of using the N word repeatedly in her interactions with Black members of staff.

Suffice to say, the atmosphere in the workplace “has significantly changed”, says the worker whose written statement we have seen.

There is an investigation ongoing, but two months on from lodging the complaint no action has yet been taken, not even a suspension of the manager.

We have since received a response to the allegations from the supermarket.

A Tesco Spokesperson said: “We take all allegations of racism and discrimination of any kind in the workplace extremely seriously. We cannot comment on individual cases but any allegation is investigated thoroughly by a trained and impartial colleague and we always take action where necessary.”

The complainant – who wishes to remain anonymous at this stage – sent BLMM a copy of the written statement outlining the unacceptable and shocking racism that exists at the store:

Racist manager refuses to apologise or show any remorse

“As someone who grew up in Britain during a time of racial tension when the N word was used to intimidate, insult, ridicule and belittle in a demeaning manner, with the intent of causing pain and distress, I was triggered back to very painful and upsetting times when the use of the word and its intentions were deemed acceptable in society.”

“I do not trust that should any future incidences of any nature occur between colleagues and customers that Tesco management team will be fair and impartial in its handling and processing of such matters.”

For 10 years the Tesco worker has been complaining about racism at the store and says the latest incident is part of a catalogue of discrimination issues.

The Tesco group that the store comes under has seen at least 20 complaints made about racism at stores in north London, with Lee Valley, Chesthunt and Ponders End stores all said to have seen racist incidents involving Tesco managers or other employees.

The latest such occurrence was on Sunday 8 November when the words “Slaves sold on a Friday” was scrawled across a Black Friday promotional display.

update: The display was positioned in the staff canteen, which narrows down the number of possible culprits. After being contacted by the Daily Mirror, Tesco management finally called in the police.

The manager failed to take action until workers at the store demanded its removal.

The alleged racism at the Tesco store follows a furor over the company removing two Black actors from its Christmas TV advert.

Perhaps in response to Black Lives Matter, UK supermarkets – notably Sainsbury’s which has received a racist backlash for featuring a Black family in its Xmas advert – have been trying to pay more than just lip service to anti-racism and diversity.

But many might be forgiven for concluding that it is really just window dressing in Tesco’s case, given the blatant racism that has been making the working lives of its employees at the South Tottenham store a living nightmare.

Racists have become much bolder in the wake of the racist agenda of the government in recent years, and a prime minister who is yet to apologise for the many racist comments he has made. And of course the likes of Trump across the pond giving legitimacy to white supremacists and fascists hasn’t helped matters.

There has been an increase in racist abuse and attacks across the country, with Muslims (and by inference Asian people generally, as the racists don’t differentiate) and Black people bearing the brunt.

David Burke of the Daily Mirror has now followed up on our story: