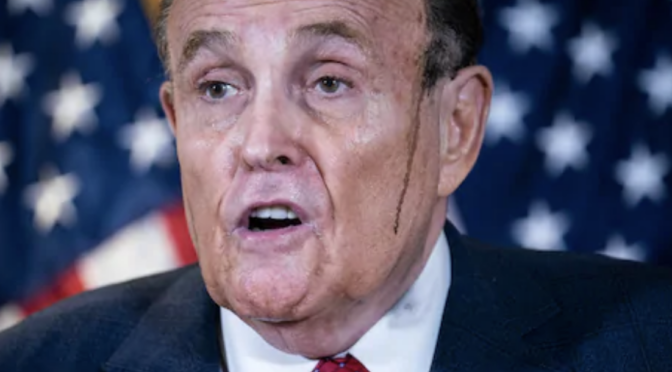 Trump’s lawyer Rudy Giuliani who you might remember from the latest Borat film, as the sleazy man with his hands down his trousers, is apparently still not embarrassed about appearing in public.

With a man like this tasked with trying to steal the election from Biden and Harris, we already knew the chances of Trump making any headway were slim to non-existent.

But that’s not holding back Giuliani.

He held another press conference yesterday, at which he made more unsubstantiated and wild claims about supposed election fraud and one of the companies that supplies counting machines – Dominion.

As is typical of the American right, his comments were laced with straight up racism and anti-semitism, as he claimed that George Soros was funding BLM, Antifa and that Cuba and China were in on the ‘steal’ efforts.

His deranged nonsense was of course not for the consumption of ordinary folk, but the rabid near-fascist base of diehards, whose whole world collapsed when the reality dawned that Trump lost by more than five million-plus votes and also massively on the electoral college vote tally.

But that wasn’t what caught the eye of the assembled journalists, who still had visions of the previous presser, which was held in a parking lot with the Trump media team sandwiched between a pawn shop and a crematorium, outside Four Seasons Total Landscaping.

Nope, this time it was even more bizarre.

As the so-called lawyer spewed his anti-Semitic bile and full-on racist garbage as he spun his story about Dominion (the voting machine people) and how they were run by Venezuela’s Chavez (from the grave presumably), before correcting himself by remembering that the president of Venezuela is a man called Maduro, a weird brown juice started dribbling down the side of his face – it was his hair dye!

Is this a thing with men in the Trump orbit, and of course Agent Orange himself who spends tens of thousands of dollars on his appalling hair do?

And here’s that video, in case you missed it – 30 seconds in: