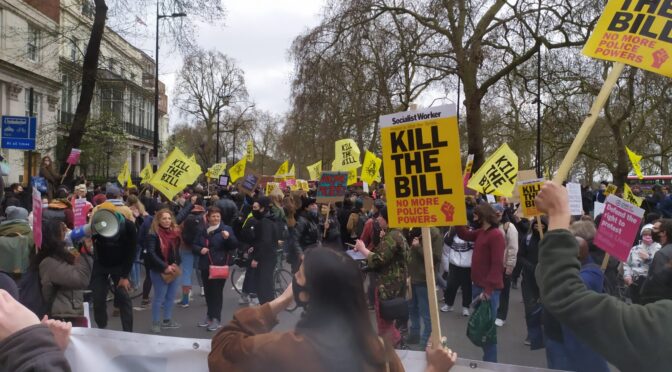 The government’s response to last year’s mass Black Lives Matter protests has been to produce a report denying the existence of institutional racism and to bring forward legislation to make many protests illegal.

The Police and Crime Bill would give to the police the power decide which protests are lawful and which are not, just like in Russia and China.

This is a blatant attack on our democratic right of freedom of assembly and the right to protest. We have to kill the bill.

The bill also targets the Roma and traveller communities – arguably some of the most marginalised communities in the UK.

But in truth there are only so many police and if the people say no and refuse to comply then their laws become a paper tiger.

The answer lies with resistance from black and white people together across all the social movements, such as Extinction Rebellion, the Women’s Movement (Justice for Sarah Everard, Nicole Smallman and Bibaa Henry!) and the trade union movement – and of course the Black Lives Matter movement.

Kill the Bill protests are taking place all over the UK today this May Day – join the fightback!

May Day is workers day – Black and white unite and fight!

Kill the bill protest – 1 May