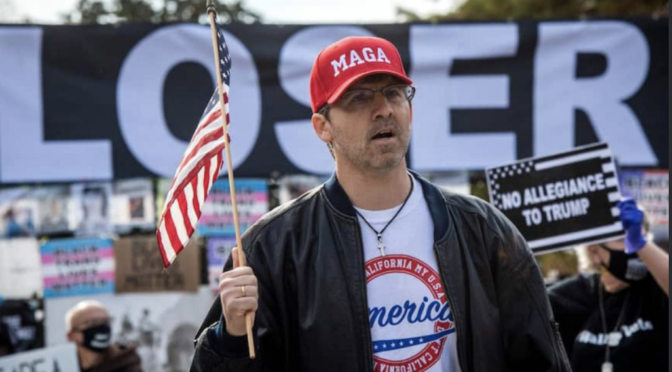 The million maga march is a flop – official! The Trump diehards haven’t quite managed the million they had claimed would be in attendance.

Instead, there was a rag-bag showing more like in the hundreds, not even the thousands.

Trump, who didn’t exactly do a lot of work for the people in his four years as president, is doing even less now.

Indeed, it was when he was on the way to play golf at one of his nearby courses that his cavalcade ran into a gaggle of his enthusiastically deranged supporters who swarmed his car.

Some of his fans were impressed by his apperance; others not so much. This from the Washington Post at the scene in DC:

A group of women huddled around their phone, looking at a video they took of Trump’s appearance.

Among those that turned out were the fascist thugs that otherwise go by the name of the Proud Boys.

Here you can see the Nazi thugs initiating a new member of the tribe (try not to laugh):

They couldn’t find any black people to beat up on and looked rather disconsulate (turns out the cowards waited until nightfall to do that).

As usual at gatherings of the Trump meat-heads, there were no masks in evidence on Freedom Plaza, so the covid virus was certainly having a good day out.

After they had finished with the bonding thing, the Proud Boy thugs started rioting, pretty much on the order of Trump:

ANTIFA SCUM ran for the hills today when they tried attacking the people at the Trump Rally, because those people aggressively fought back. Antifa waited until tonight, when 99% were gone, to attack innocent #MAGA People. DC Police, get going — do your job and don’t hold back!!!

Trump called the gathering of the far right and various hangers on “heartwarming”, as you would expect of the fascist enabler.

But the Trump well-wishers are not having the streets to themselves – far from it.

BLM and anti-fascist counter-protesters showed up early and made sure ‘LOSER’ signs were in view for the arriving ‘millions’.

There’s no sign yet of Alex Jones and his gang of militia terrorists who said on Thursday they would be showing up today.

Meanwhile, the TikTok generation is raining on Trump’s parade again. The #millionmagamarch hashtag has been taken over by the youth of America, with a proliferation of pancakes (Biden flipped four states, Trump none) to make the point about who actually won the election.

The MAGA crowd earlier in the day ripped down BLM memorials to Black men mudered by police. Those memorials have largely since been repaired, as the smell of buring MAGA flags fills the air: