Home » Met police BAME recruitment will fail because of racism 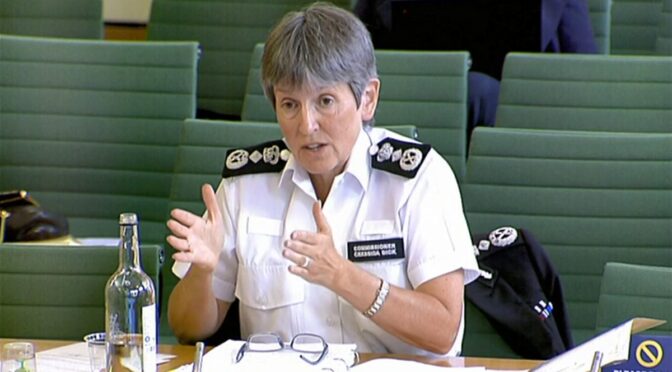 The institutionally racist London Met police introduces its so-called “race action plan” today, and a key recommendation will be that 40% of new recruits must come from black and minority ethnic (BAME) backgrounds.

Unfortunately, however, the head of the London police, Commissioner Cressida Dick, remains in denial about racism in the force.

At a recent select committee parliamentary hearing on the police’s outrageous racial profiling seen in its rampant and ineffective (from the point of view fighting or preventing the commission of crimes) stop and search policies, Dick claimed the disproportionate number of black people being stopped was “because they committed more crime”, despite evidence to the contrary.

In addition, a report this week from from Netpol, a network of police monitoring groups, has discovered what we already knew – the BLM protests were over policed by Uk police.

Violent incidents were almost not existents around the country and when some scuffles with police happened in London it was in response to police actions, such as when they charged horses into peaceful protesters on Whitehall.

Not only are black people disproportionately stopped and search, the police also use more violence when doing so than the average for society as a whole.

Recruitment of officers from minority backgrounds has increased markedly in recent years, but that has made no difference to the institutional racism with the ranks of the Met. This is no surprise – it is the institution that is the problem.

Individual police officers can no doubt be “non-racist” or even “anti-racist” but the culture and operational practice of the police is the problem and that stems from the nature of the work they do. Policing is about maintaining the rule of those at the top of society and racism is a useful divide and rule stratagem.

Police are more racist than rest of society

Add to that the fact that we live in a racist society, it is not surprising that the police are racist. But the key point here is that the police do not just reflect society – they are the worst of society. The oppressive nature of their job leads them to operate in a fashion that presupposes that working-class people commit more crimes and that black people as part of that, are the worst offenders.

So when shocking crimes such as the ignoring of fire regulations that led to the installation of flammable cladding to blocks of flats, such as at Grenfell in west London, leading directly to the deaths of at least 81 people, not a single person has gone to prison or even been prosecuted.

So what are the chances of the police hitting their 40% target for black and minority ethnic new recruits? Zilch. The police are uniformly hated in the black community for good reason.

BLM movement puts Met police on the back foot

But the fact that the Met police are talking about a “race action plan” is because of the power of the mass movement on the streets that took hold in the BAME mobilisations – supported by hundreds of thousand of white allies – behind Black Lives Matter summer.

The police have been forced to do some window dressing, but behind the scenes nothing much will change.

Instead, we need to strengthen the movement on the streets and in our communities and social organisations as our best defence against police racism.

We need to get to a situation where every time they stop and search a black youth in London, they are met by a surrounding throng of concerned citizenry challenging their behaviour.

Having more black faces in the police will make no difference. Just as in the US where there are plenty of black officers in police forces, it hasn’t stopped the continuing reign of terror by the police there. Indeed, whole police departments in the inner cities are supposedly run by black politicians – from police chiefs to attorney generals – but the racist murders by police still take place daily.

Read more on the case for scrapping Section 60 – the powers that allow police to apply draconian laws to whole borough so they don’t even have to provide a reason for stopping people. The number of such stops are on the rise in the big cities, especially London and the Birmingham.