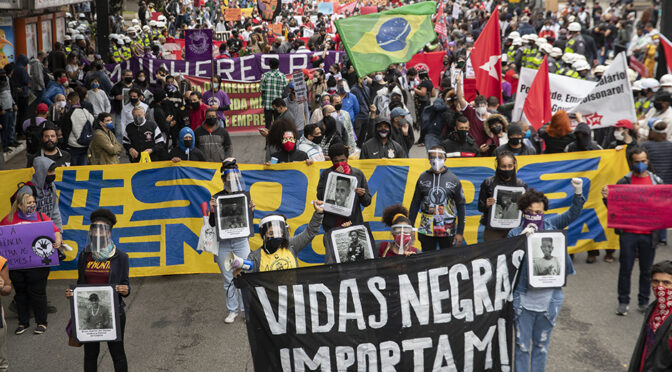 Brazil has been convulsed with protests following the racist beating to death by security guards of a mixed-race Black man, Joao Alberto Silveira Freitas, in the South American country.

The man was outside at a Carrefour store, a French supermarket chain that operates in the country. An argument is said to have taken place inside the story.

Protesters have called for a boycott of all French companies and French-made goods.

The French elite is currently waging a racist war against Muslims in France and its troops are still operating in its former colonies in Africa.

The shocking footage of the killing, which took place on 20 November, quickly went viral and was swiftly followed by angry protests.

Despite an unjustified reputation for diversity, Brazil is in fact one of the most racist societies on the planet.

Slavery was only abolished in the country in 1899 and Black people are at the bottom of the pile for all economic and social indicator.

Racism has got worse – if that’s possible – since the election of racist president Bolsonaro.

In 2018 popular left-wing politician Marielle Franco was assassinated by police and Bolsonaro has been accused or ordering the killing.

That’s despite the fact that Brazil has a majority Black population, but you would never know that from the countries leaders and thosee in positions of power.

Literally nearly two thousand Black people were killed by the militarised police force in Brazil last year – that’s the official figure; the real figure is thought to be much higher, especially when the military are included.

Two security guards are now under investigation for the murder of 40-year-old Joao Alberto Silveira Freitas. The killing took place just outside a Carrefour store in Porto Alegre, southern Brazil.

It turns out that one of the security guards is an off-duty policeman.

Clearly he doesn’t just like killing Black people when he’s in uniform, but also does it in his spare time too .