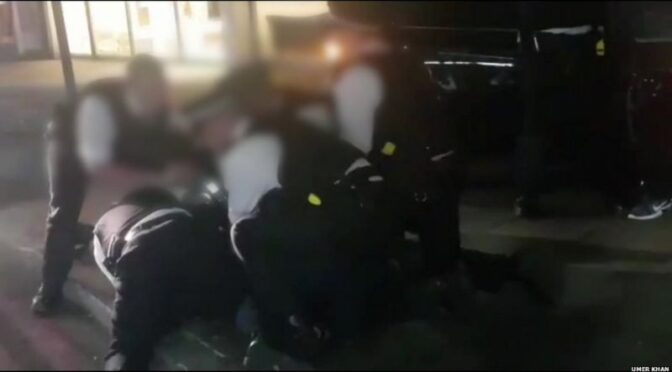 A video of a Black woman violently assaulted by police in Lewisham has emerged months after the incident.

The graphic video shows as many as eight police officers forcefully restraining the woman, with one officer punching her while she is on the ground.

The woman – who provided her first name to the BBC’s Newsnight – reports how she was lifted off the ground by the handcuffs placed on her and by her braids, leading to hair being pulled out of her scalp.

The video was taken by concerned bystander Umer Khan in May this year.

Black woman violently assaulted: “if you can talk you can breathe” says racist cop

When she complained that an officer who was pinning her to the ground was killing her, the officer said, with a smirk on her face, “if you can talk you can breathe”.

The officer said they were arresting Janet for obstructing a drug search.

The violent assault, which took place in Lewisham, south-east London, didn’t end on the street.

Back at the police station there was more violence from the police thugs.

Janet was repeated punched by an officer and was illegally strip-searched in the presence of male officers.

It has been well documented that the police use disproportionate amounts of force when interacting with Black people.

BBC’s Newsnight discovered that ‘Use of Force’ – a legal level of violence that the police are allowed to use as part of their duties – has increased markedly:

BBC Newsnight has obtained Use of Force data from 37 out of the 44 police forces in England, Wales and Northern Ireland.

During the lockdown months of April and May, 27 out of the 37 police forces saw a rise in Use of Force, compared with the same months in 2019.