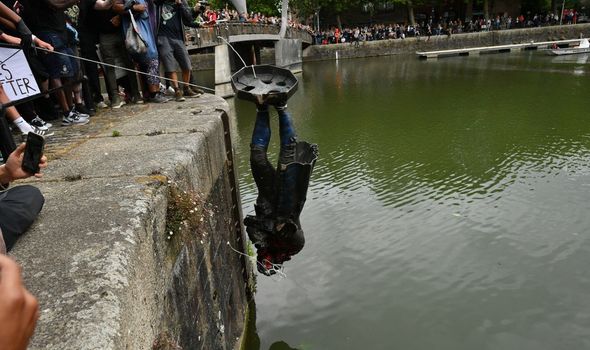 The statue of a slave owner Edward Colston has been pulled down and thrown into the river at the thousands strong protest in Bristol today.

50,000 marched in London yesterday, 25,000 in Manchester and hundreds of thousands in cities and towns large and small all over the country.

The movement is growing and radicalising. And it is a global movement.

In the US, Democrat politicians and black office holders are being exposed for their years of inaction.

The mayor of Minneapolis was forced on to a “walk of shame” when he refused to commit in front of an audience of thousands of protesters, to defund the police.

The demand to defund the police is attacking the heart of the system and exposes the deep root and branch changes that are needed to end racial injustice and institutional discrimination.

On the London demo yesterday the determination was on display for all to see.

Police decided to stop people leaving the protest at one point and decided to charge their cavalry at the peaceful marchers, with officer not looking where she was going and getting knocked off her horse.

This is a mass movement against racism the like of which has not been seen, at least in the US, since the 1960s.

When Health minister Matt Hancock claims this is all about the US and the UK doesn’t have a problem with racism, it shows how out of touch this racist Tory government is. Having a few black and Asian faces in high places is not a badge of anti-racism. These people are doing the dirty work for the government.

With more than 1,700 people killed in police custody or after contact with a police officer since 1990, Hancock’s comment betrays his ignorance.

This is the government that has brought us the hostile environment, the Windrush scandal and the mounting disproportionate BAME death toll in this ongoing pandemic.

This is the governing party that refuses to investigate Islamophobia within its own ranks.

Police murder black people here in the UK too

In one month in June 2017 four black men were killed by British police, at least two in circumstances not dissimilar to the murder of George Floyd. Rashan Charles and Edson Da Costa died after being restrained by police. Choke holds by police are commonplace as is police brutality.

Black people in London are disproportionately fined – about half of all such fines – for breaking covid rules while Cummings can do as he pleases.

Yesterday, police blocked peaceful demonstrators from leaving the protest and then charged at them with horses. Why?

Why is the government not holding a full public inquiry into disproportionate BAME deaths, as Diane Abbott and many other MPs are demanding?

Why is there still no blanket amnesty for all those caught up in the Windrush scandal? Why has only a statistically insignificant amount of compensation been paid to victims from the £200 million allocated?

Why are black people twice as likely to be killed by police and eight times more likely to be stopped and searched?

Why is black history still not integrated into the curriculum?

Why has Boris Johnson never apologised for all the racist remarks he has made, or for allowing a pseudo scientific article declaring black people to be inferior to appear in the Spectator magazine when he was editor?

These are just some of the questions this government and Hancock and a Johnson need to urgently answer with action not words.

Join the protests next weekend. Fight for socially distanced protests.

Call protests in your area.

Sack and prosecute racist police who brutalise our community.