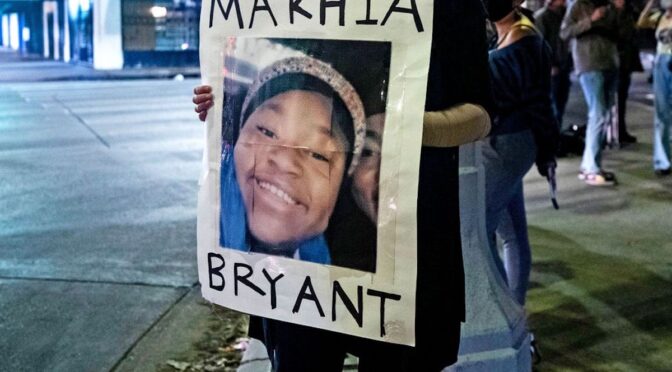 An international report by human rights experts from around the world has called for the US to be taken to the International Criminal Court over the police killings of African Americans.

The 100-page report details the ongoing catalogue of murders and brutality that is systemic to the US and continues as part of its legacy of slavery and the racist white supremacists attitudes and practices it gave birth to.

Within 24 hours of the guilty verdicts against Derek Chauvin for the murder of George Floyd six more people were killed by police, not all of whom were Black. Thos deaths follow the US police killing of Daunte Wright just 10 miles away from the trial as the court was sitting.

From the US News and World Report:

A 16-year-old girl in Columbus, Ohio.

An oft-arrested man in Escondido, California.

The deaths, in some cases, sparked new cries for justice. Some said they reflect an urgent need for radical changes to American policing — a need that the Chauvin verdict cannot paper over. For others, the shootings are a tragic reminder of the difficult and dangerous decisions law enforcement face daily.

An unidentified man in San Antonio.

Another man, killed in the same city within hours of the first.

A 31-year-old man in central Massachusetts.

US police killing of Ma’Khia Bryant

On Tuesday last week a Black teenage girl Ma’Khia Bryant was shot dead by police in an instant in Columbus, Ohio.

Cops were called to a fight outside her foster home. In the body-cam release by the police the teenager is seen lunging at someone with what appears to be a knife. She lunges at a second and the officer – Nicholas Reardon – shouts “Hey! Hey! Get down! Get down!” and then shoots her dead as the chaotic scene unfolds.

After the four shots are discharged, a shocked onlookers shouts: “You didn’t have to shoot her! She’s just a kid, man!”

The officer replies with his explanation: “She had a knife. She just went at her.”

Another neighbour verbally accosts the officers: “Do you see why Black lives matter? Do you get it now?”

Nope, they don’t get it. Sure, she has what looks like a knife but why didn’t;t the policeman shoot in the legs, why shoot to kill?

The same question could be asked of many many other murders carried out by the police. That’s to say, as far as Black people are concerned they deem it as always the preferred option to shoot to kill.

The fact that Ma’Khia was a child has been deliberately lost by the media and the defenders f the police who prefer to describe her as “a big woman’, “out of control” etc.

Her treatment in life and death is the same as that experienced by other black girls, who are often held to adult standards in the weird racist ‘adultification’ that goes on in America.

For more on the racist adultification of Black girls read what Dr. Jamilia Blake, a co-author of the Georgetown Law Center on Poverty and Inequality report and a psychology professor at Texas A&M University has to say.

There have also been a number of recent incidents of children as young a five being handcuffed and brutalised by police in the US.

…and another US police killing: Andrew Brown Jr ‘execution’

Then there was the killing at the hands of the police of Andrew Brown Jr. in North Carolina.

Andrew Brown Jr., 42, was fatally shot by Pasquotank County sheriff’s deputies in Elizabeth City on Wednesday when they attempted to serve him with an arrest warrant, the sheriff’s office said.

Few details — and no video — have been released publicly about the shooting.

In dispatch audio from that day, first responders can be heard saying a man had gunshot wounds to the back. A copy of his death certificate says he died as a result of a gunshot wound of the head.