Home » Maxine Waters is right: Chauvin is guilty and we need to step up our action 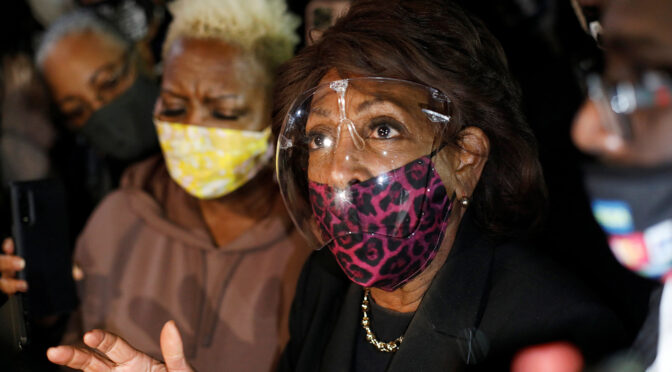 America and the world waits pensively for the verdict from the jury in the trial of racist ex cop Derek Chauvin who killed George Floyd.

Although the evidence against him was overwhelming given what we all saw with our own eyes, such is the depth of racism in the US that police are still given great leeway in their dealings with black people.

The sad reality is that all black people in the US are seen as a problem to be controlled. This is a mindset that goes back to slavery and continues to underscore the racist attitudes of police but also of many ordinary white people.

Attempts to blame Floyd’s history of drug taking and the impact that may or may not have had on his physiology for his death were desperate, or to suggest that Chauvin acted “reasonably”, were laughable.

But it only takes one jury member to decide there is sufficient doubt in the prosecution case for Chauvin to be acquitted.

However, there is another risk that has emerged following comments made by congresswoman Maxine Waters and the interpretation put on them by the judge in the trial.

In an unusual statement from the judge, he explicitly claimed that the statements by Waters attending the scene of the killing of Daunte Wright just 10 miles way from the court, may somehow provide grounds for an appeal seeking mistrial.

Judge Peter Cahill described Waters words as “disrespectful to the rule of law and to the judicial branch”. So what did she say exactly?

In other words the BLM movement will have to step up the fight. Again, there is nothing controversial in any of this but the racist republicans are now using it as an excuse to indulge in one of their favourite sports: attacking black women.

On this occasion Waters is to be applauded. However it should also be noted how few congressmen and women actually take part in protests on the streets.

Break from the Democrats

Leadership is about taking risks but also speaking truth to power. Waters deserve our support and the support of the rest of the ~Democrtas in Congress. But more than that we need black leaders to take to the streets regardless of the verdict from the jury.

Furthermore, the movement needs to stop putting its faith in Democrat politicians and the left more widely needs to break from that party, which after all has its roots as the vehicle of the slave power for the pivotal moments of US history.

America needs a truly progressive political formation that puts the struggle first not getting elected to office.