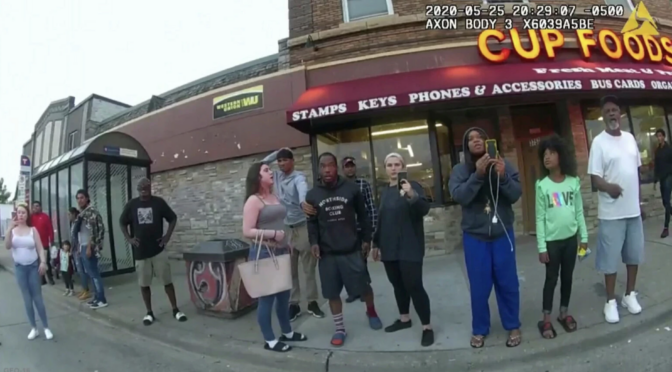 The trial of Derek Chauvin for the murder of George Floyd has put America on trial for its institutional racism.

Already the Chauvin defence strategy is clear – assassinate the character of the victim and insist on the unblemished professionalism of the killer police officer.

In this weird police union world it is not the knee on George Floyd’s neck that killed him but his poor heart condition and alleged drug use.

All this simply piles pain on the family, despite the ‘financial compensation’ they have received from Minneapolis city authorities. But no amount of money will bring George back from the dead.

The trial is expected to last a month and will prove to be both tortuous and painful.

One thing is certain – if the jury fails to convict Chauvin on the second degree murder charge, which is too weak a charge in any case – there will be hell to pay, both in the US and around the world. BLM will make sure of that.

Witnesses to George Floyd’s killing: ‘It seemed like he knew it was over for him’

The most powerful testimony at the first day of the trial came from Darnella Frazier, the teenager who was one of the bystanders filming the murder and is now 18 years old.

Having witnessed the killing, she is still traumatised by the experience and sometimes finds it hard to sleep as she thinks over if it she could have saved George’s life by intervening.

She spoke of how she would lay awake “apologising to George Floyd for not doing more and not physically interacting and not saving his life.”

“It seemed like he knew it was over for him. He was terrified. He was suffering. This was a cry for help, definitely.”

The onlookers at the scene were understandably scared to intervene and noted how all the police on scene refused to respond to warnings from bystanders about the threat to George’s life their restraint clearly showed.

Donald Williams, 33, a mixed martial arts fighter called the police on the police, such were his fears, as he saw the life being squeezed out of George. “I believe I witnessed a murder,” he informed the 911 phone operator.

Genevieve Hansen, 27, was another. witness to the murder. She is a firefighter and just happened to be passing by.

Hansen told the police to check George’s pulse but they told her to go away. “I would have been able to provide medical attention to the best of my abilities, and this human was denied that right,” Hansen stated to the court.

Chauvin’s lawyer Eric J. Nelson tried to claim that the police officers on the scene were being threatened by the small crowd of onlookers.

Hansen probably had the best response to that twisting of the truth: “I don’t know if you’ve seen anybody be killed, but it’s upsetting.”

Another thing that is emerging already from the trial is the bias of the judge, who took issue with several comments from witnesses, telling them not to argue with the court, and admonishing Hansen for daring to point out the trauma of watching someone being killed in front of their eyes.