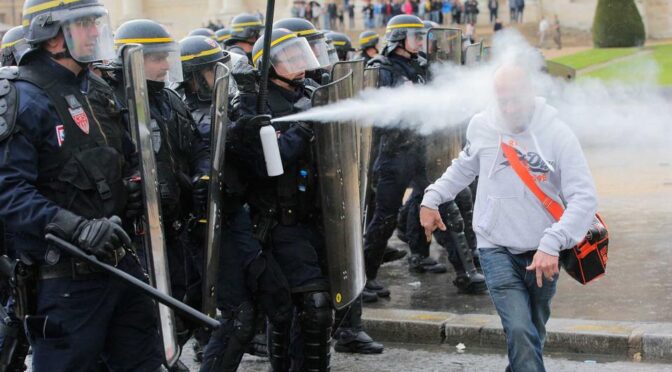 French police, fresh from beating and terrorising homeless and destitute refugees on the outskirts of Paris, at the weekend viciously attacked and abused with racist insults a black music producer.

The racist cops – the majority of French police are members of the Fascist National Rally (formerly National Front) party – thought there were no witnesses. Unbeknown to them, there was a security camera filming the whole thing.

The police charged the victim – Michel (pictured above) – with resisting arrest and it was only when the video emerged that the truth came out. This latest attack took place in the music producer’s own studio.

The incident is even more disturbing because the French national assembly has passed a new law forbidding anyone – even the press – from filming the police.

It happened on Saturday in Paris. 15 minutes of racist beatings and insults. The crazy scene of police violence that we reveal is simply amazing and uplifting. We have to watch it to the end to understand the full extent of the problem.

Macron, with fascist Le Pen breathing down his neck – has launched a war against Muslims in the country, as well as giving the police a green light to step up their already rampant racist violence.

And it’s not just minorities that the police hate.

The Yellow Vest protest movement was subject to regular attacks by the police, as have school students on recent protests outside their schools when they protested about the government’s failure to provide personal protective equipment to schools and other public health resources.

On 23 November this was France’s finest in action on the outskirts of Paris attacking defenceless and destitute refugees:

And below is some more racist French police violence from the suburbs of Paris.

The police are torturing this man for fun because he broke the lockdown by going out to get food. Meanwhile all the well-heeled middle classes and rich people had left Paris for their second homes in the countryside: