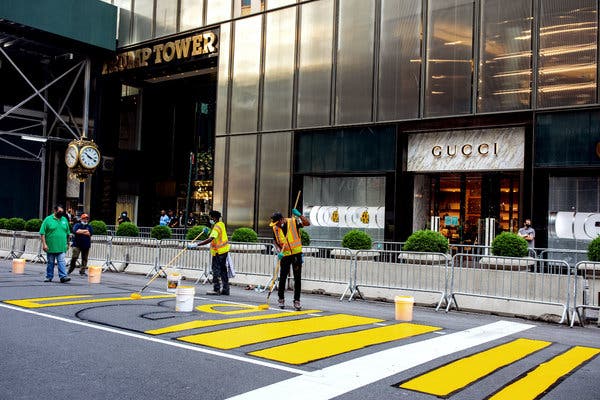 Unfortunately Trump is unlikely to see it in person as he doesn’t visit his hometown anymore, because he is so universally hated there.

Hopefully the paint job will put off people spending their money at the hotel and hasten the demise of Trump Inc.

The shine was taken off the whole affair somewhat though, after the sighting of Mayor Bill de Blasio joining in with the roadworks.

This is the same Bill de Blasio who was singing the praises of the New York cops when they were brutalising peaceful protesters.

The same mayor that imposed curfews in a dangerous attack on the freedom of assembly that is meant to be guaranteed in the US constitution.

The same Bill de Blasio who got elected – as did some other Democrat politicians – on the promise of addressing police racist violence, militarisation and general corruption, but then after getting into office doing nothing.

But de Blasio aside, it’s still good to see some irritant being rubbed into the eyes of the man in the high castle.

There’s more on thumbing it to Trump Tower at the New York Times:

NEW YORK — New York City Mayor Bill de Blasio grabbed a roller Thursday to paint “Black Lives Matter” in front of the namesake Manhattan tower of President Donald Trump, who tweeted last week that the street mural would be “a symbol of hate.”

De Blasio was flanked by his wife, Chirlane McCray, and the Rev. Al Sharpton as he helped paint the racial justice rallying cry in giant yellow letters on Fifth Avenue in front of Trump Tower. Activists watching chanted, “Whose streets? Our streets!”

The mayor announced the plan to paint “Black Lives Matter” in front of Trump Tower last month after earlier saying the slogan would be painted on streets at several locations around the city. Trump responded via Twitter that the mural would denigrate “this luxury Avenue” and “further antagonize New York’s Finest.” De Blasio tweeted back that Black Lives Matter is “a movement to recognize and protect the lives of Black people.”

Rahima Torrence, 20, who was among the people slapping yellow paint onto Fifth Avenue, said that even though the mural might be a symbol, “it’s the beginning of something more.” She said the location in front of Trump’s own skyscraper “shows that we matter and it shows to him that you can’t ignore us.”