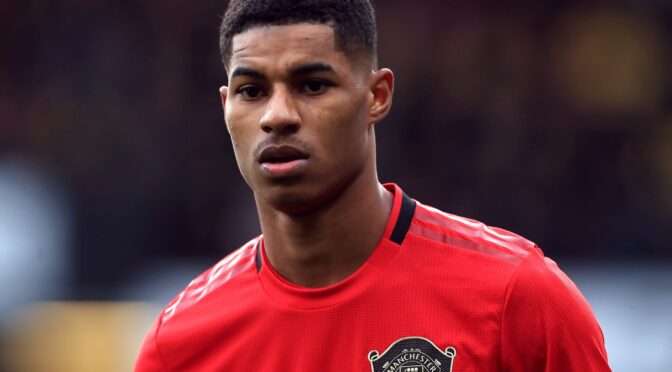 Marcus Rahsford is under attack from Daily Mail racists.

Manchester United footballer is a national hero in the UK, but you wouldn’t know it if you read the Daily Mail.

The right-wing ‘newspaper’ has made a career out of sniping at and hating on successful Black sporting professionals who don’t know their place.

So it is perhaps with no surprise that we have to report on the disgusting attacks on Rashford for having the audacity to earn a lot of money and to invest it for the future of himeslef and his family.

According to the Mail the Man U star and leader of the campaign to force the government to provide free school meals to the poorest children in the country during school holidays, there is something incongruous about his wealth.

They can’t stand the idea of someone who would campaign to help poor people because he hasn’t forgotten where he came from.

The Daily hate Mail cannot understand altruism and caring about others. It finds it even more annoying that there are some black people who have lots of money.

On the one hand they blame black people for lack of ambition and then when you make it, they take you down for having the audacity to earn so much money!

Marcus Rashford is investing his money in property, as many of the more sensible pro footballers do. Footballers have a playing career that ends in their mid 30s at best, so they have to invest while the sun is shinning.

And being a generous guy, he isn’t doing it all for himself, but for his extended family. That should be something to be applauded not derided as the obnoxious Mail does.

Daily Mail supported Hitler and Mosley in the 1930s

The Daily Mail has a history of supporting fascism so, to repeat, we can’t be too surprised by the bile that it spews. Afterall, this is the so-called newspaper that brought us headlines in the 1930s proclaiming ‘Hurrah for the Blackshirts’, when they backed the Fascists and virulently anti-Semitic Oswald Moseley Fascists.

But the Mail isn’t just picking on Rashford. They – and others in the British media – had it in for boxer Amir Khan in the past for being “arrogant”, continually poke at Formula One champion driver Lewis Hamilton for his ‘woke’ support of BLM and other causes.

Anthony Joshua has also been attacked for daring to stand up for racial equality.

They even attacked BLM for supporting the justice camapaign launched by the family of Edson da Costa, killed by police officers in 2017 in east London.

Star Wars actor John Boyega has also been sneered at by the same newspaper for speaking out in support of BLM at Hyde Park at the beginning of the summer at the protest in which our group helped to organise on the day.

Manchester City and England footballer Raheem Sterling has also got the racist treatment from the Mail and large sections of the British press, who insinuate that he just doesn’t try hard enough when he plays for England and that that might be to do with him being black – the subtext is he’s not realy English.

Papers like the Mail have rightly been singled out by Sterling and BBC football commentator and pundit Gary Lineker as the ones who help to fuel and boost the racists online that hound black sports stars and anti-racists such as Linkeker who dare to speak out in favour of refugees.

The Mail is a stain on society and along with the rest of the billionaire press should be consigned to the dustbin of history.