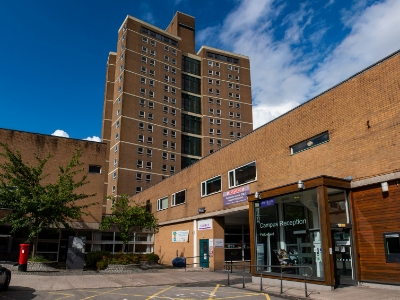 There was outrage at the end of last week after Manchester Uni security guards racially profile one of the institution’s black students as he tries to enter his hall of residence.

The incident took place on Friday 13th November on the university’s Fallowfield campus.

The racist security guards who violently slammed the student against the wall associate black skin with not “looking right” on a university campus.

Apparently there has been a lot of drugs being dealt and used by students (yeah, that stuff happens at universites) and if you are black you must be the drug dealer!

What is the name of this security firm? They need to lose the contract with the university.

All of the security guards involved need to be fired forthwith.

The University told the Guardian newspaper, “On Saturday 14 November we were made aware of an alleged serious incident on our campus and began investigating it immediately. We have been in regular contact with the affected party and keeping them fully informed of our progress.”

But as yet no action has been taken against the company that provides the security service, although the guards have now been suspended.

This outrage follows the university erecting fencing around student halls as they sought to cage them in on campus as supposed Covid safety measure.

A student rebellion led to the tearing down of the fencing, forcing the university to apologise.

Universities across the UK duoed students into returning to campuses in order to pocket their fees and rent monet , while providing no Covid safety measures.

On the contrary, cramming students into halls and busy campuses turned universities into major Covid hotspots in their communities.

The National Union of Students needs to get on this sharp!