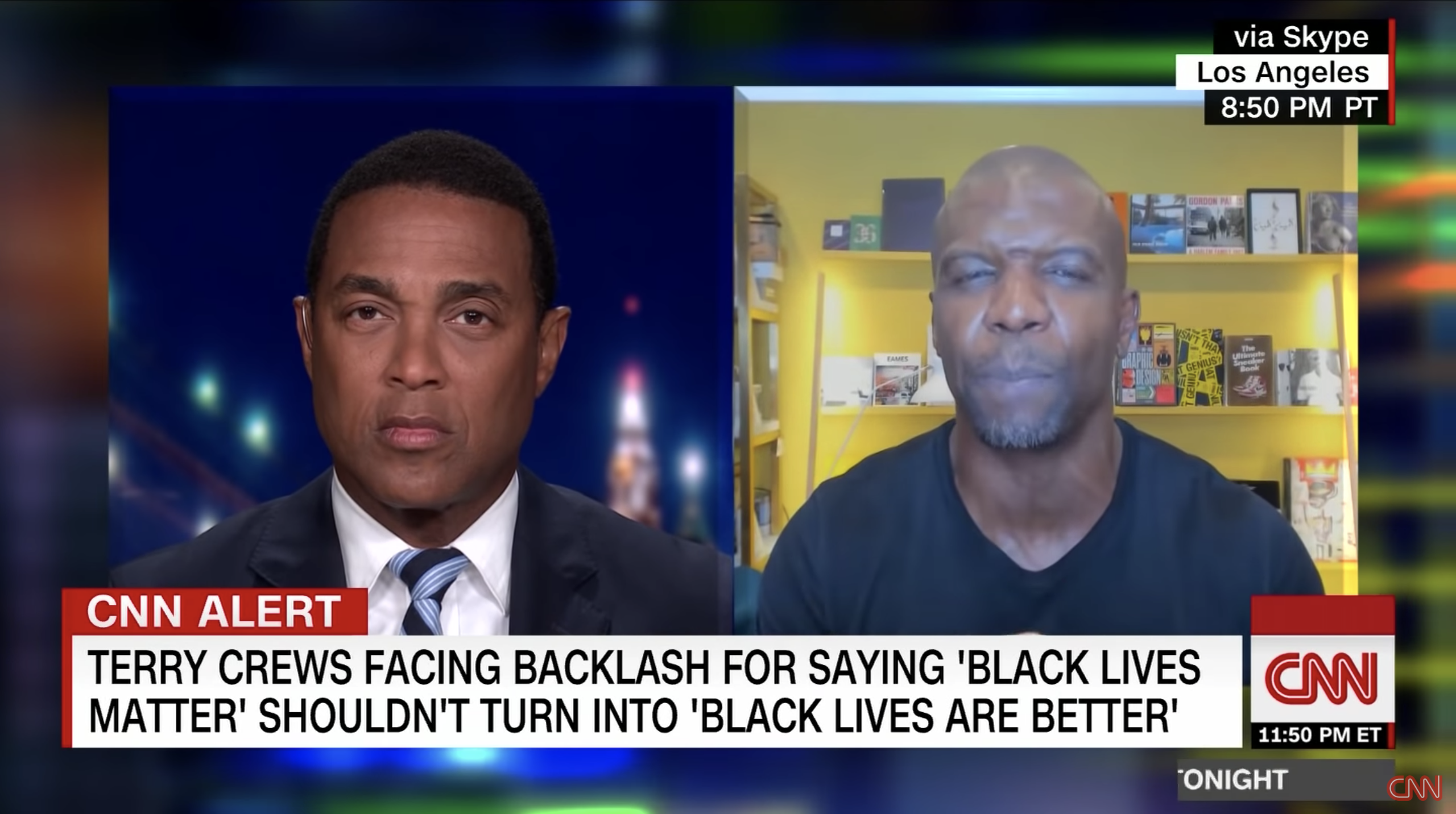 America’s Got Talent host, actor Terry Crews, has been taken down by CNN anchor Don Lemon for his politically naive and dangerous attacks on the Black Lives Matter movement.

Crews in a series of tweets implied that the movement was taken over by “militant-type forces” , which he seemed to infer was about promoting anti-white sentiment.

But Crew gave no concrete example to illustrate his worries on that score.

The BLM protests have been notable for their huge involvement of white people, so the charge is way off mark, to put it mildly.

Crews went on to talk about “dangerous self-righteousness” , concluding that some people “really viewed themselves as better.”

He even likened the supposed presence of anti-white attitudes to white supremacy.

“It was almost a supremist move … where their (sic) Black lives mattered a lot more than mine,” he claimed.

To be fair to Crews he did say he was talking more about the leaders than he was the movement.

In Crews tweet on 4 July he points out that there’s good and bad in all races, which is of course true. But who was disagreeing with him?

The founders of BLM in the US are all women – Patrisse Cullors, Alicia Garza, and Opal Tometi  – and the organisation does take on the concerns of women and makes reference to the role of the family in perpetuating women’s oppression, which is a fair point.

From the US BLM website “what we believe” page:

We make our spaces family-friendly and enable parents to fully participate with their children. We dismantle the patriarchal practice that requires mothers to work “double shifts” so that they can mother in private even as they participate in public justice work.

We disrupt the Western-prescribed nuclear family structure requirement by supporting each other as extended families and “villages” that collectively care for one another, especially our children, to the degree that mothers, parents, and children are comfortable.

Not done with comparing BLM to white supremacy, Crews then went on to say BLM was in danger of becoming the new oppressor. We knew there were some problems with the Black upper middle class but Crews has certainly put it all out there.

“I don’t want to move from one oppressor to the next,” he railed.

To Don Lemon’s credit he didn’t give Crews a pass on his dangerous nonsense.

They called MLK Jr a commie too

As Don Lemon asked him quickly, “Who’s the next oppressor?,” Crews moved on to talk about gun violence within the Black community in Chicago, the number of young victims it has claimed, and BLM’s silence on the matter.

“But what does that have to do with equality, though, Terry?,” Lemon asked. “I don’t understand what that has to do with equality. Listen, there’s crime. There are people in those communities, those people aren’t just being nonchalant about gun violence.” The anchor then detailed what he had seen from gun-violence activists when he worked at a local Chicago TV station from 2003 to 2006.

Crews should stick to talent shows. He should get some education. Or maybe he was getting BLM mixed up with these guys – NFAC?

Here’s the Don Lemon interview in all its gory detail.

You can find the BLMM statement of what we believe here, but it is not a definitive statement and applies to no one but ourselves.