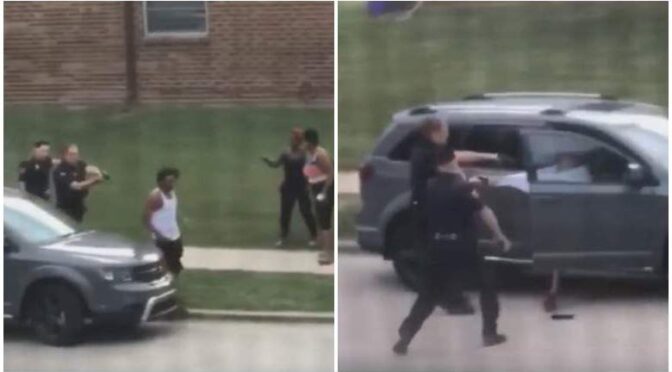 Protests have broken out in Wisconsin after police shot a black man many seven times in the back in. what police describe as a domestic incident.

Victim Jacob Blake was taken to hospital for surgery and is now fighting for his life in intensive care.

The video below posted by an attorney who appeared on the scene, online shows Mr Blake being shot as gets into a car in Kenosha. His young children are in the car.

Authorities in the city declared an emergency overnight curfew after unrest broke out following the shooting.

As of writing, no Kenosha Police Department officers have been disciplined.

Reactions to the video were swift. Within hours, protesters gathered.

The short video, shot Sunday afternoon, shows members of the Kenosha Police Department (KPD) pointing a gun at Jacob Blake while he walks toward a vehicle. While Blake opens the door, an officer grabs his shirt and shoots him at close range, in the back, seven times. Blake slumps against the car horn while onlookers react in horror.

(Video may be disturbing to some viewers.)