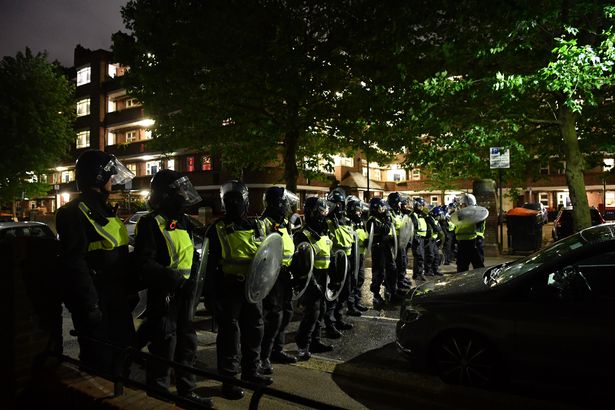 A series of incidents across London are seeing tensions between the community and the police boils over.

One law for Black youth, another for middle-class white people

This comes against the background of mounting concern about the racist nature of the contrast between how black youth are dealt with in the Covid pandemic as opposed to white sunbathers on beaches, or mostly white people gathering in large numbers in cramped conditions in and around pubs, such as in Soho Square in London’s West End yesterday.

In those locations there is not a policeman to be seen but as soon as black youth organise their own cheaper forms of entertainment there’s a visit from the Metropolitan police’s Tactical Support Group (riot police).

In addition to the panoply of stop and search laws the police already use to harass black people – such as under PACE, Section 60 and anti-terrorism legislation, there is a new weapon in their locker: the Covid Act.

This was made clear not long into the pandemic when black people were soon shown to be disproportionately more likely to be stopped and fined by the police.

Ken Hinds, who runs a police monitoring group based in Tottenham, north London told BLMM: “Why don’t they come and talk to the community and the elders so we can supervise our own events instead of sending in riot police?”

“There’s an explosion coming if the police carry on like this with the TSG [Tactical Support Group].”

The rising tension has seen young people push back against police intimidation and wanton violence.

BLM activist Gary McFarlane echoed those sentiments: “After weeks of being told by the Tory politicians and others who should know better, that there was nothing to be fighting about here in the UK concerning racism – we see on display in this racist policing of block parties the full extent of the institutional racism of the police, and the government and politicians who encourage them.

“This comes after numerous cases of police racist violence and profiling, such as around the death of Nicole Smallman and Bibaa Henry.

“Then there’s the appalling treatment of Andrew Boateng and his son and the most recent outrage that has just come to light of Ryan Colaço, who has been repeatedly stopped by racist police -– one time after coming back from a Channel 4 interview about police harassment. Enough is enough.”

McFarlane continued: “The Met should know that more of this brutal discriminatory policing will see localised fight backs turn into a general anti-police conflagration across London. Is that what they really want?”

After months of being confined in flats with no gardens and with little money, the Black Lives Matter movement has given black (and white) working-class youth greater confidence to challenge racist policing practices.

Parties have been held in Streatham, Brixton, Tottenham, Kensal Town to name just a few areas of London, where videos of riot police have gone viral.

However, if you are a middle class white person partying and spending £5 on a pint of beer in Soho in crowded conditions that break all Covid social-distancing rules, that’s just fine. Not a cop in sight.

Raise your voice against the criminalisation of Black youth

This story will be updated throughout the day