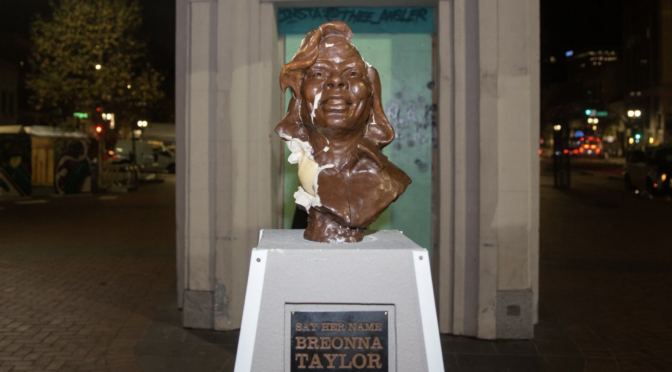 In a little less than two weeks after the installation of the memorial statue to Breonna Tayor, racists vandals have attacked and smashed it.

The memorial was sculpted by white artist Leo Carson, taking him several months to complete the work.

Breonna – an emergency room medical technician – was killed by police in Louisville Kentucky upon exercising a so-called “no knock” warrant in March 2020.

Protests to demand justice for Breonna took place all over the world, including in the UK.

This latest act of racist vandalism sadly follows similar incidents across the US, notably in Washington DC when Trump supporters and fascist from the Proud Boys racists street gang sought out and destroyed memorials to other African American individuals killed by police officers.

Leo Carston said of the attack: “I built it to support the Black Lives Matter movement, but that also makes it a target for racist aggression.”

Since the attack took place, $25,000 has been raised to fund a bronze replacement The original was made from less sturdy clay with ceramic finish.

In other news, of the three officers involved in the killing of Breonna, one has been fired (detective Brett Hankison) and another two are slated for termination – Detective Myles Cosgrove (one of the shooters) and Detective Joshua Jaynes (who got the search warrant from the judge).

None of the police have been charged with the actual killing of Breonna. Hankison was found guilty of wanton endangerment because one of his bullets entered a neighbouring apartment.