Home » Bristol police are the thugs, solidarity with protesters who fought back 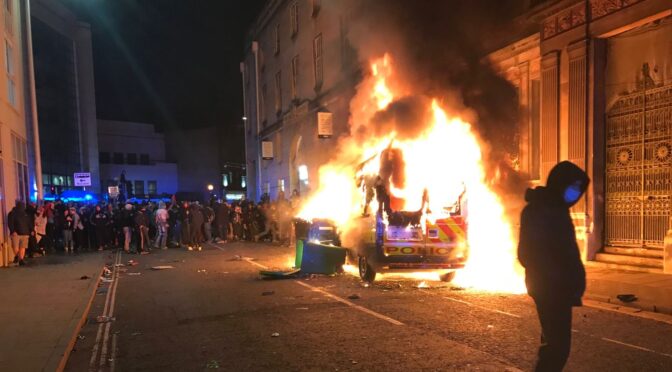 The police went on the rampage in Bristol yesterday in a display of wanton violence that has been covered up by the media and politicians.

The thuggery on display last night was from the police who attacked peaceful protesters.

Now they are launching a hunt for as many as 500 people as they look to intimidate the youth of an entire city to stop future protests against the Tories’ proposed law to give police even more powers to curtail democratic rights.

People who marched to the police station sat down in the road – and then the police attacked.

Chants rang out “Shame on you” as the police hit out.

One student who does not want to be named says she was punched in the face by a police officer.

The same student said she saw people being cornered and beaten by riot police and women abused with sexist language.

Yet all the media can think to do is parrot the lies of the police press releases.

Disgracefully, Bristol’s Labour mayor Marvin Rees joined in the lies and witch hunt, claiming that the protesters were showing their “privilege” and that the demo had nothing to do with political protest. He even tried to claim that it was all white people protesting and that they were making things worse for Black people!

But the protest was in fact called by Bristol BLM and Extinction Rebellion and other groups.

A warning for the Tories and their Orwellian media

Far from being unpolitical, it was a release of the pent up anger over the alleged murder of a Sarah Everard at the hands of a police officer, the attacked on a vigil of mourning women, the outrageous provisions of the police bill that puts more value on a statue than it does on a woman, the prosecution of movement heroes the Colston Four, who played a part in the righteous toppling of the statue to a slaveholder in the city, and of course it was ultimately a protest against a government whose deliberate and callous negligence has led to the death of 125,000 people, while at the same time enriching its friends in business with £37 billion wasted on an ineffective test and trace system.

Meanwhile young people have no jobs, pay exorbitant rents, hand over money for fees for a university education that is second rate and live on a planet that is dying.

The truth is we live in a corrupt country where the police are out of control.

We also live in a country of hypocrites that is quick to attack undemocratic practices abroad but has a blind spot when it comes to their own actions here at home.

It will take many more protests to reclaim our streets from the thugs in blue and the government that encourages them in their wanton violence.

The tories received a warning last night but they show no sign of heeding it – this is how states lose legitimacy. All power to the people!