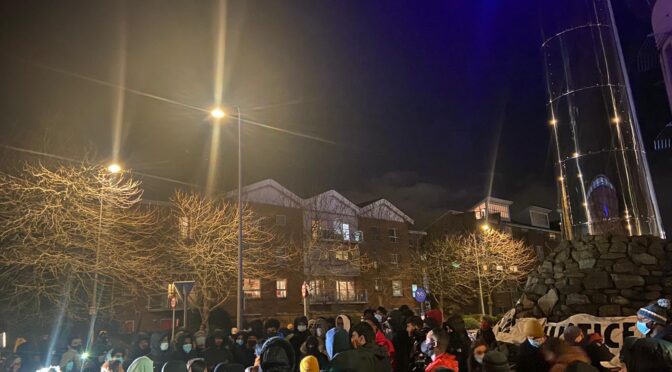 Black Lives Matter (BLM) activist Bianca Ali has been fined £1,000 for being part of protests against the death of Mohamud Hassan, who died after detention by South Wales Police. Daily protests have taken place since the alleged beating of Mohamud by police last Friday (8 January).

He was released on Saturday morning (a week ago) and died later at home. He was covered in wounds and bruises family and friends say after he was beaten by police. His death has been met by spontaneous protests to demand justice.

The police who claim no excessive force was used against Mohamud in the police station, have refused to release any video footage from inside the station. The CCTV and body cam footage his reported to have been released to the IOPC investigators.

Bianca is not taking the state repression lying down: “They will never keep me quiet, I will always speak out against injustice.”

A gofundme page has been set up for Bianca to pay the fine. The response has been magnificent – £1,590 has been raised already.

At the time of writing £48,862 for the Justice4Mohamud campaign and all monies for Bianca’s fine above the £1,000 required will be sent to the campaign to get justice for Mohamud.

Please join BLMM in donating to the campaign – donate here

The protests outside the Butetown police station were not organised by BLM Cardiff, despite what the police claim.

BLM Cardiff said: “The police took two riot vans to Bianca’s house and were banging repeatedly on her door. Please tell us why, other than disgusting intimidation tactics, that was needed?”

“As we said before, we did not organise these protests – if anyone organised these protests, it’s the South Wales Police [because of their brutal racist violence]. “What did they expect people to do?”.

“The movement cannot be stopped.”

The Justice4Mohamud campaign is going from strength to strength. A solidarity protest was held in London which was also met with police repression and arrests.

I supposedly independent investigation is being conducted by the Independent Office Of Police Conduct, with south wales police describing Mahmoud’s death as “a tragedy”.

But South Wales police have a long history of racist policing which stretches back to the infamous Cardiff Three – in which three black men were framed for the murder of Lynette White, one of the most blatant miscarriages of justice ever seen in Wales – and beyond.