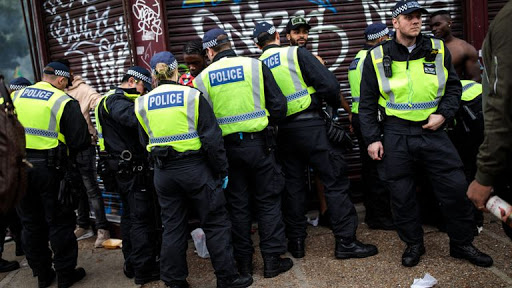 Home secretary Priti Patel has announced the government’s intention to push ahead with yet more racist stop and search powers for the police, despite no evidence that they help to stop violent crime.

The government plans to introduce legislation to enable the introduction of Serious Violence Reduction Orders (SVRO), which would allow the police to stop and search any individual who has been convicted of a prior criminal offence.

Patel announced the new measures in comments to the Mail on Sunday.

But there is no evidence that stop and search fights crime. In 2018/19 nothing was found in 72% of searches. Black people are already 10 times more likely to be stopped than who’re people and the serious violence reduction orders will increase this racial disproportionality.

Add to this the fact that the draconian Section 60 of the Criminal Justice and Public Order Act means the police already have wide discretion to stop and search without the need to show “reasonable grounds”, the real purpose of Patel’s new power grab is to be seen to be acting tough and, sadly, to stir up more racism.

Only 5% of stops under Section 60 lead to an arrest.

SVROs will give the police power to search anyone with a previous conviction without having to provide grounds for doing so. How are such persons going to be identified? By the colour of their their skin?

The rollout of SVROs comes on the back of the increase in stop and search targeting Black kids, under the guise of the Covid legislation. Stops in May 2020 in London shows that 1 in 8 of all Black males aged 15 to 25 were stopped in London.

Stops by the London Metropolitan police in May 2020 were double the figure for 2019, according to the Home Affairs select committee.

Patel told The Mail on Sunday: “A minority will say these measures are disproportionate and will affect minority communities or claim that this is racism. That is simply not true.

“People will say these measures are controversial. But to me, when people are dying, that doesn’t matter. The government’s number one job is to keep our people safe.”

The Tories don’t care how many more lives their policies ruin and care even less about the addressing the real causes of violent crime.

Much of inner city violent crime on the streets is driven by turf wars over drugs, so why not legalise all drugs.

Many stops in London and elsewhere are initiated because a police officer says they could small cannabis, so why not legalise cannabis as they have in Canada and more than a dozen US states?

Meanwhile, Black men continue to die after contact with a police officer, such Mohamud Hassan who dies in Cardiff last week after allegedly been beaten by police office at the Butetown police station.