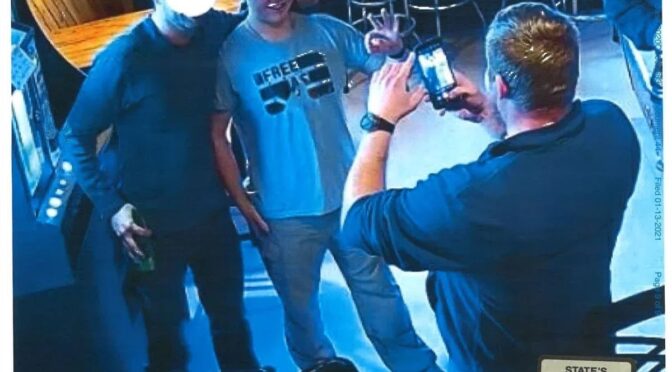 White supremacist Kyle Rittenhouse has walked free from his court case despite killing two people at a protest against the police shooting of Jacob Blake in Kenosha Wisconsin.

From start to end, the trial has been set up to deliver no guilty verdicts of the five felon counts for which the teenager was standing trial.

The judge in the case – Bruce Schroeder – was revealed to be a radical conservative when his ringtone went off in the court to the strains of a song beloved of conservatives: God Bless the USA.

But if court watchers were made abundantly aware of the biases of the judge when he refused to allow the prosecution to refer to the defendant as a white supremacist.

Evidence of Rittenhouse’s racism is seen in the picture of him out drinking with the fascist gang the Proud Boys and flashing a sign used by white supremacists.

But the prosecution was not allowed to refer to Rittenhouse with the truthful words “white supremacist” but the defence was able to refer to peaceful protesters as looters and arsonists.

It gets worse. When the prosecution lawyer referred to the dead and shot as victims he was admonished by the conservative judge.

Last week Rittenhouse began sobbing when he took the stand and the judge went to a recess, presumably in sympathy with the racist defendant. The sub-text is of course that it is the vigilante killer armed with an AR-15 automatic rifle who is the real victim .

The Jim Crow laws may have been consigned to history but the racism that underpinned them lives on.

The “self-defence” ploy that saw Rittenhouse walk free is based on the racist assumption about the need to use excess force when confronted with protesting Black people and their supporters.

In this view Rittenhouse is the innocent man-child.

If Rittenhouse were Black, his tears would have gotten him nowhere. Even when Black children are victims of racial violence, they receive little compassion and are perceived as adults rather than minors. During a 2012 bail bond hearing, George Zimmerman, who killed Trayvon Martin, told Martin’s parents, “I did not know how old he was. I thought he was a little bit younger than I am.” Martin was 17. Zimmerman was 28.

When two Cleveland cops killed Tamir Rice in 2014, they said they believed the 12-year-old Black child was much older, a sentiment echoed by a prosecutor who said Rice was “big for his age,” as if that justified his death. No charges were brought against the officers.

In good old Jim Crow style, Kinosha is 25% non-white but the jury was 95% white. The jury was selected in unusually rapid time and Rittenhouse was allowed to draw lots during the selection process.

The litany of biases and open sympathy for the defence saw the judge support the claim of the defence that video evidence submitted by the prosecution was distorted by Apple software and its was for the the defence to prove that this was not the case.

Prosecution layer Thomas Binger was repeatedly attacked by the judge. On one occasion when Binger asked Rittenhouse why he had remained silent since his arrest the judge reprimanded him, screaming at the lawyer, “Don’t get brazen with me”.