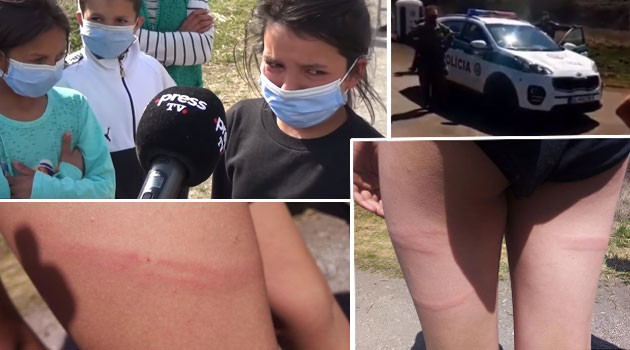 In the Romani settlement of Krompachy, which is currently under quarantine because of COVID-19, a police officer is said to have beaten five young children with a truncheon on Monday. According to the children’s testimony, he even threatened to shoot them.

The entire incident is said to have been observed by a soldier in the Slovak Army. The children’s mother, Anna Holubová, posted the information to Facebook and it is being reported on by two Romani media outlets in Slovakia, Gipsy Television and Press TV.

A boy age 10 and four girls, two age 7, one age 9 and one age 11, went to collect wood and play near a stream in a location where soldiers had previously allowed them to go. “We went for wood and the cop began to chase us and shouted at us that if we didn’t stop he would shoot us. We stopped and he took us into a tunnel and beat us there,” one of the little girls described to Press TV while crying.

According to Gipsy Television, military physicians treated the children. They did not, however, immediately give medical reports about the injuries to the children’s parents.

They say the parents will receive the reports from the Defence Ministry. News service Romea.cz also wanted to find out what the Slovak Police have to say about the incident.

The Krompachy Police refused to make a statement about the case and referred Romea.cz to the police spokesperson for Košice, who did not answer her telephone for an entire afternoon. The case should begin to be investigated by the Slovak Interior Ministry’s Office of Inspection Services.
“The police inspection knows about the case and will take action once the necessary documentation is delivered,” Silvia Keratová of the press department of the Interior Ministry told Gipsy Television.

Slovak MP Jarmila Vaňová, a Romani community member with the governing OĽANO party, commented on the case on social media by posting “Children are not for beating”.

Update: 1 May 2020
There have been conflicting statements from the authorities. The interior ministry of Slovakia has issued a statement that the children’s families say is false. In the statement, released earlier this week, a doctor claims that the children received the injuries before contact with the police officer.

Violence against the Roma by both the police and fascists is endemic in Slovakia and many other parts of Europe, with the European Union refusing to intervene effectively to protect Roma rights.

Daniela Abraham, founder of the Sinti Roma Holocaust Memorial Trust, says the government is worried by the response from the Roma community to this latest racist outrage, and so are the fascists. “I have received threats from the far right since I started sharing about this on social media. I have written protests to the Slovak prime minister Igor Matovič and the president, Zuzana Čaputová. I urge everyone else to do so too.”

“It is bad enough when they beat and torture Roma people – I’ve just watched disturbing footage from Romania in which a Roma man is being tortured by the police – and nothing is done about it. But these were just little children. We are all united to get justice for our children and need the help of all anti-racists in Europe to stop the terrorising of our community,” Abraham continued.

“The authorities are using the virus as an excuse to spread even more hatred and violence against the Roma.”

But with the testing, all is not what it seems on the face of it either.

In the Krompacy area, according to the government, there are 40 cases of Covid-19. The 4,000 Roma who live in the area reside in four slum settlements. The one in which the children are resident is called Stara Masa and has no cases of infection. This means that the 40 infections are in the other three settlements.

However, all the settlements have been placed under “quarantine” after a government “hygienist” inspected the slums and the testing began.
This is despite the government’s own guidance which says that such quarantine measures should only be introduced when infection rates are 10% of more in a given community.

Roma representatives say the quarantine is being used to control the Roma and not to stop the spread of the Covid-19 disease.

Testing in Roma communities in Slovakia began on 3 April, with initially 33 communities tested as part of a pilot, which the authorities say focused on those returning from abroad or those “who wanted to be tested voluntarily” according to Slovak news site DNES 24. A total of 793 were tested over four days to 6 April, including Krompachy where the children were assaulted by police

Andrea Bučková, the government Plenipotentiary for the Roma Community, reporting on tests conducted on Sunday 5 April, said: “The results for the first day of testing confirmed that in the village of Jarovnice, where there is the highest concentration of Roma, no one has tested positive for COVID-19 to date”. [Google Translates].

The head of the local government in and around Krompachy, Iveta Rušinová, has not hidden this, say local Roma. She is on record as saying the Roma will stay under quarantine even after the virus has gone, according to locals.

Both Rušinová and local police have sought to blame the victims themselves.

“No one has the right to raise their hand on a child. But where were their parents, who are responsible for them? They were on the third-class road and alone, unattended,” she said.

A spokesperson for police force special operations, Mário Pažický, claimed “we support any investigation”, but it should not be used to undermine the “legitimacy of our ongoing operations. We can say with certainty that the minors escaped from the quarantined settlement.”

But the police and authorities have not addressed the fact that there is no Covid-19 infection in the settlement the girls live in, and why there is a quarantine imposed there and on the other Roma settlements in Kompachy.

There are no quarantines in Slovakia, except for those imposed on Roma communities.

Many Roma refuse to provide their names or the settlements they come from when making accusations of blatant racism by Rušinová, for fear of retribution.

Despite years of empty promises, the authorities have not connected Roma communities to water services and are holding the threat of never doing so over the heads of the population.

Yet the same authorities say they want to eradicate the Covid-19 outbreak, such as it is, in the settlements where they claim their tests show the virus is present.

Roma representatives are demanding urgent international intervention.
The Romani Union of Slovakia has called for a full independent inquiry into the beating of the young children in Krompachy and the threats to shoot them, in addition to the circumstances surrounding the discriminatory “quarantines”.

Also, the Slovak Republic embassy in London was contacted for a response to the allegations, but they have provided no comment.

Thanks to romea.cz for granting permission to reproduce their report from 29 April. ( http://www.romea.cz/en/news/world/slovak-police-officer-said-to-have-beaten-five-romani-children-in-krompachy-settlement-and-threatened-to-shoot-them )