From the Evening Standard 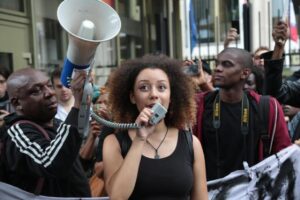 Capres Willow organised a 3,000 person strong march in support of the two African-American men shot by police in recent weeks in Minnesota and Louisiana

Capres Willow had never been to a protest when she decided to organise, at three days’ notice, a march in central London to support Black Lives Matter, the global activism movement which began in 2013 in the US after the shooting of black teenager Trayvon Martin in Florida, and has continued to campaign against violence towards black people and police brutality.

The 18-year-old, from Waltham Abbey in Essex, expected around 30 of her friends to show up — she ended up with 3,000 on Oxford Street on Sunday, brandishing banners of support for Philando Castile and Alton Sterling, the two African-American men shot by police in recent weeks in Minnesota and Louisiana.

“I’d messaged about 10 people in the morning to see if they were interested and my cousin replied, saying: ‘We don’t have nearly enough time before Sunday.’ Basically, it’s a nice thought but it’s not going to happen. She messaged me back that night saying ‘I’m so sorry I ever doubted you.’”