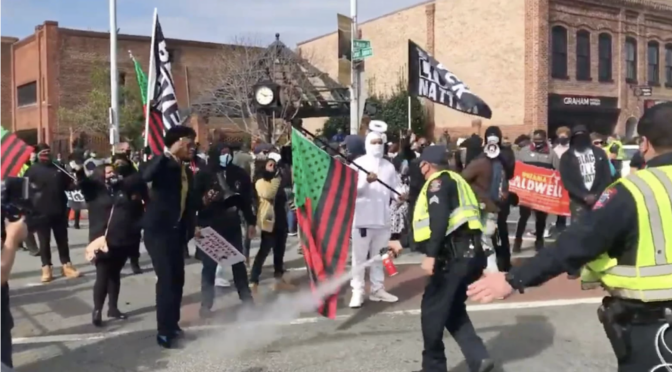 It’s hard trying to vote in America if you are black as an ‘I am Change’ BLM march to get out the vote discovered.

Although we’ve come along way since the legal segregation and oppression that was the Jim Crow regime, the same methods used then to keep black people away from the polls, are returning in force.

Suffice to say none of the cops involved in launching the pepper spray attack have been disciplined. In fact they probably got rewarded when they returned to the police precinct for services to the Trump campaign.

Amy Goodman at Democracy Now has the full story:

How the ‘get out the vote’ BLM march was attacked

Police in Alamance County in North Carolina pepper-sprayed a peaceful get-out-the-vote march Saturday, descending on the crowd after they stopped near a Confederate monument to kneel in honor of George Floyd, who was killed by police in Minneapolis in May.

Viral videos of the violent police action show officers in riot gear attacking the marchers, including young children and elderly people, who had intended to walk to a polling place on the last day of early voting in North Carolina.

At least eight people were arrested, including march organizer Rev. Greg Drumwright, who says police gave the crowd of hundreds only 14 seconds to clear out before attacking.

“We never made it to the polls,” says Drumwright. “We believe that this interaction, this interference from the local authorities, has obstructed our marchers from not only lifting up our First Amendment rights but also our rights to vote.”