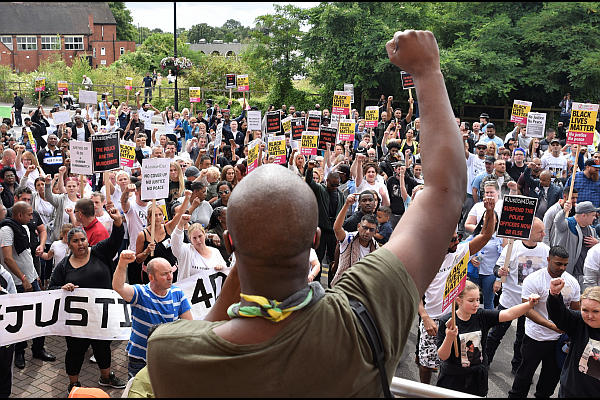 Over 350 people attended a march in Nuneaton, Warwickshire yesterday, Saturday, to protest for justice for Darren Cumberbatch from Coventry.

Darren died following an incident with Warwickshire police on 10 July.

Witnesses and family have alleged that he was assaulted and tasered by the police that evening. Darren was placed in intensive care at George Eliot Hospital, Nuneaton, after being “dearrested” by the police.

He remained in a coma and died on 19 July.

Campaigners marched from Nuneaton railway station to the McIntyre House hostel where Darren had been staying. Candles were lit and flowers left in tribute at the hostel entrance.

The march then moved on to the police headquarters in the town.

The march followed an angry and determined public meeting attended by over 200 people in Coventry last Wednesday.

Speakers on Saturday included Darren’s family, community activist Rev Desmond Jaddoo and witnesses from the hostel where Darren was interrogated by police on the night he ended up in a coma.

The march was led by Darren’s family and supported by his many friends as well as community activists and trade unionists from Coventry and beyond.

Desmond Jaddoo stated to big cheers, “We have brought one of the main roads in Nuneaton to a standstill. No one gets through, in the name of Darren Cumberbatch. We want Justice for Darren.”

Carla, Darren’s sister, said, “Numbers is power. I am going to make my voice heard in the name of my brother.”

Visit www.facebook.com/Justice4Daz/ to support the campaign.