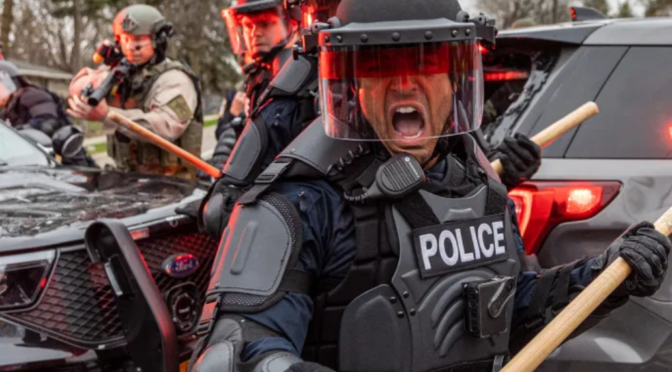 Daunte Wright, a 20-year-old black man is dead after being shot by racist police in a Minneapolis suburb.

The murderous shooting took place during a traffic stop on Sunday and shortly after the man had phoned his mother, Katie Wright, to say he was being pulled over by cops.

The community has risen up in protest against the latest police killing of an innocent black person.

Protests broke out last night and continued into Monday morning, with the Brooklyn Center suburb at the centre of the rebellion.

Underlining the horror of the latest shooting is the fact that it took place a mere 10 miles from where the cop – Derek Chauvin – who murdered George Floyd is on trial, just before the 11th day of that trial.

As is typical of racist America, the authorities instead of arresting the killer cops, have launched a repressive push back against protesters, firing rubber bullets and other weapons at members of the community.

Even with the eyes of the world on the Minneaplos police force, their impunity still knows no bounds.

As is usual for such police crimes, the cops got in their narrative (lies) first.

Chief Tim Gannon of the Brooklyn Center Police Department said that as the traffic stop unfolded the police discovered that there was a warrant out for the arrest of the motorist, as if this was excuse enough for the shooting dead of Wright.

Katie Wright said her son told her he had been pulled over “for having a dangerous air freshner on his car window”.

The ACLU [American Civil Liberties Union] said his mother heard the cops tell him to get out of the car but they refused to say why. Then she heard scuffling followed by gunshots.

The bodycam of the latest police murder has yet to be released, despite calls from family members and the community.

The killing of Duante Wright follows outrage over the treatment by racist police of US Army Lieutenant Caron Nazario, who was assaulted and threatened with being shot by cops in Virginia. Nazario is of mixed Africa-American and Hispanic heritage.